« BACK TO ALL PROJECTS

Get in touch today

« BACK TO ALL PROJECTS

As part of the Royal Academy of Arts 250th anniversary, this iconic British institution is undertaking a £12.7 million restoration funded by the Heritage Lottery Fund (HFL), private individuals, trusts and foundations.

Our plaster ceiling moulding and restoration expertise were called upon when we were asked to replicate existing plasterwork, repair areas in multiple rooms and dismantle the historic ceiling in the British Academicians Room.  We took the ceiling down in sections and later reassembled this ceiling in the newly constructed wing where the BA room has been replicated. We had to store the 150 ceiling pieces in a secure unit while we worked on producing bespoke moulds to recreate missing or damaged sections.  We cast moulds of each section we took down, to ensure we safeguarded the original ceiling. 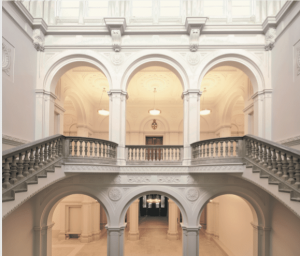 We have created new decorative arches to match existing and manufactured and installed a bespoke fibrous plaster niche in the main entrance. The most spectacular room to work on has been the Lecture Theatre where we surveyed and secured the original ceiling. We are repairing and replicating existing mouldings to return this room back to its former glory.”

Our hard work has been recognised as we recently won the FIS Gold Contractors Award in the “Heritage Plastering” category – click here to read more.  We have also received an excellence award sponsored by FisSkills for this project.  Our project has been featured in an article in the Premier Construction magazine.  To read the article click here.

Throughout this project, we have been working closely with the Conservation Architect, Julian Harrap Architects. Lyall Thow, Partner, he added:

“The service that Artisan Plastercraft has been providing is of the highest quality. Their skill in restoration has been demonstrated in the British Academicians Room where they have managed to conserve large areas of the original plasterwork as opposed to re-construction.”

“The team at Artisan Plastercraft carried out an excellent job on this challenging project. Every room had differing requirements on this complex Grade 2 star listed project. The Site supervision was second to none and they consistently topped the safety league each month. Retaining the old and bringing it back to life was the aim of this development and the whole team were very impressed with the outcome. The senior management team were always on hand for technical queries and methodology discussions with the Heritage Architect/consultant team.”

The restoration plans will link Burlington House on Piccadilly and Burlington Gardens for the first time, uniting the two-acre site.

To follow the Royal Academy redevelopment’s progress and other plans to mark the 250th anniversary, please visit: https:// royalacademy.org.uk/ra250.